Join Wingard’s Naturalist and USCG Captain Zach Steinhauser or Rick Crout for a pontoon tour of the largest purple martin roost in North America… right here on Lake Murray. Zach has been all over the United States, and even to Brazil, studying this migratory songbird. You’re sure to enjoy this sunset cruise to Bomb Island, with our tour guides who are undeniably the most knowledgeable tour guides on the lake. Evening tours showcasing the daily return of the martins to Bomb Island at sunset will be available Tuesday through Friday, beginning June 28 thru August 26. The martins leave the island at dawn each morning for their day of insect hunting and training their newborns for the long flight to Brazil in the Fall. We have also scheduled four early Saturday morning tours to watch the martins take off from the island at sunrise.

This little island attracts thousands of bird enthusiasts to witness this unparalleled event. Join us for an intimate, 6 passenger cruise, where you can see thousands of purple martins up close and enjoy time on Lake Murray. Please see product descriptions for morning event details.

During summer evenings, hundreds of thousands of Purple Martins travel to the 12 acre Bomb Island in Lake Murray to roost. This little island attracts thousands of bird enthusiasts to witness this unparalleled event. Join us for an intimate, 6 passenger sunset cruise, where you can see thousands of purple martins up close and enjoy time on Lake Murray.

Note that guests who arrive late will be left at the dock and will not receive a refund or opportunity to reschedule.

There is a $3 fee per car to park at Jake’s Landing, and carpooling is encouraged. Please pay for parking inside the building, before you board. Chilled water will be provided on the tour, and you are welcome to bring beverages or snacks.

There are restrooms at Jake’s Landing, but not on the boat and they are not available for the morning tours. Lifejackets will be provided and are required to be worn by children 13 and under. Register online below, or call 803-359-9091 and choose option 1.

Leave the weather to us. We will not take the boat out in weather that jeopardizes safety or the experience of our guests. Trust us to make a well-educated decision in the unlikely event of inclement weather. We may cancel the trip up to 15 minutes prior to departure. Showers come and go quickly on the lake, so we do not like to cancel too far in advance. We will probably make the decision about a cancellation after you arrive at Jake’s. If a trip is cancelled prior to leaving the dock, we will re-book you into an open slot on a future trip at no charge, or refund your money in full. If a trip is cancelled while the tour is underway, there are no refunds and no rescheduling.

We have a strict cancellation policy requiring 72 hour notice from the date of your trip in order to receive a full refund. If you cancel within that 72 hour period you will not be able to receive a refund. Should you need to cancel, call us at 803-359-9091 opt 1 or email zach@wingardsmarket.com.

Reporters, professional photographers and media members can contact Captain Zach at Wingard’s Market directly at 803-359-9091 or email at zach@wingardsmarket.com for more details and arrangements.

Purple Martins are a Neotropical Migrant bird species that migrates to and from North & South America every Spring and Fall chasing the abundant insect life. They will spend their winters in South American countries like Brazil, Argentina, Venezuela, Guyana, etc. and migrate to North America to spend their summers laying eggs & raising chicks in the USA and southern Canada.

Purple Martins are aerial insectivores meaning they feed on insects while in flight. These birds feed on bees, wasps, butterflies, dragonflies, damselflies, ants, termites, mosquitoes, etc. It’s estimated that one purple martin can consume over 41,000 insects per year. Not only do purple martins feed during flight, but they drink during flight as well. They’ll fly low over a body of water and dip the bottom of their bill into the water and grab a gulp of water. 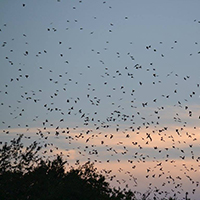 When Purple Martins migrate, there are four main routes that are taken when they fly to their nesting grounds in North America. Some birds will island-hop through the Caribbean Islands up into South Florida (Miami area) and continue up the East Coast. Other birds will fly up through Central America to the Yucatan Peninsula in Mexico and “jump off” flying to either South Florida (Naples area) or Louisiana to the Mississippi River Delta and use these corridors to reach their nesting colonies in the East or Midwestern parts of the country. Lastly, some birds will continue through Mexico to the West Coast of the USA to reach their nesting colonies in states like California & Arizona. When migrating back to their wintering grounds, these birds will use the same routes that they took on the first part of their trip. While migrating, Purple Martins will form up in huge flocks to roost for the night and spend a few days rest on their way home.

Purple Martins are what’s known as a Secondary-cavity nester; meaning they will nest in cavities created by woodpeckers or in breaks in a riverbank. Purple Martins are also colonial nesters meaning they nest in large groups in relatively close proximity of each other. Martins will lay a clutch of about 3-6 eggs will take about 51 days from when the eggs are first laid to have the chicks leave the nest. 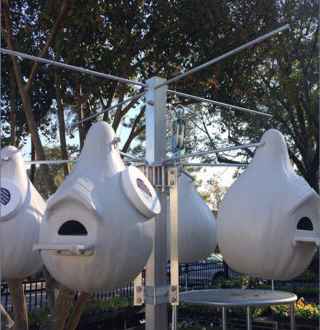 All Purple Martins East of the Rocky Mountains is completely dependent on humans to provide nesting habitat. John J. Audubon during his travels once said about Purple Martins, “Almost every country tavern has a martin box on the upper part of its sign-board; and I have observed that the more handsome the box, the better does the inn generally prove to be.”

The Chickasaw and Choctaw Native American tribes began the tradition of erecting purple martin housing. They would grow gourds and hang them in groups around their crop fields to invite martins to colonize their crop fields. The Martin colonies would control insect pests that would do harm to the tribes’ crops and the start of the farmer/Martin partnership began.

When Europeans arrived in America, they saw how effective purple martins could be at protecting crops. Colonials adopted this custom and it has remained a cultural norm in some parts of the country to this day. Today some Purple Martin Landlords like to continue the tradition of growing gourds and hanging them up, but that can get a little expensive depending on how large their colony is. Some people like to put up plastic gourds that are much lower maintenance and last much longer.

A typical Purple Martin house looks like a big rectangular box with 6 holes in each side. Some are even octagonal and can be multiple layers tall. Houses can be made out of wood or metal. Now we all know that Columbia is “Famously Hot.” It’s best to use a wooden house here in South Carolina because metal housing can cause the houses to get too hot and “cook” any residents and eggs that are nesting inside.

Here at Wingard’s we sell a style of Gourd-rack, as well as plastic gourds, that was designed in part by the Purple Martin Conservation Association. Our rack systems consist of a 15ft aluminum pole with perching beams at the top. The mechanism that holds the gourds acts exactly like that of a flagpole, where the rack can be raised and lowered via a pulley system and anchored by a cleat towards the base. Cables and wenches are an alternative to the rope/pulley system. 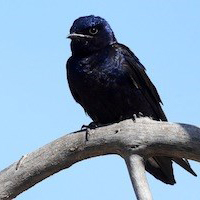 Purple Martins have plenty of predators in the wild. Hawks, Owls, Snakes, and Raccoons can cause a colony to collapse if they become too acclimated to the presence of prey at you’re your martin colony. There are plenty of ways to keep predators at bay. For Snakes and Raccoons, a cone-shaped device called a baffle can be wrapped around the bottom section of the pole which keeps animals from climbing up the pole to get at the colony. For Hawks & Owls that can hover and grab birds out of the housing, U-shaped brackets that attach to the gourds are large enough to keep those raptors far enough out of reach from the tenants of your martin colony.

Some of the worst competitors to Purple Martins are invasive European Starlings and House Sparrows. Once Sparrows & Starlings have taken up residence on a Martin Rack/House, it’s nearly impossible to get rid of them. Ways to deter them would be to buy gourds or housing with “Excluder Holes” which are opening in the housing large enough for a Martin but too small for a Starling to fit through. There are a variety of traps that can be used to catch Starlings & Sparrows and remove them from your colony.

It would be great if every yard could host a Purple Martin colony, but there are some specific requirements that come with the territory…

Martin housing needs a minimum of 40ft from any tree and 30ft from any manmade structure. Martins love wide open habitat and do not want to risk a sneak attack from any would-be predator. If you’re unable to place one in your yard, but there is available space on your neighbor’s property or in your neighborhood, don’t be afraid to contact them or your HOA and see about setting up a Martin House that you can manage.

To install a pole-system, make sure the hole is about 2.5-3ft deep. It’s best to pour concrete in the hole with pole present to anchor the pole system and avoid having it fall after being erected.

Now sometimes you can get lucky and all you have to do is set up your housing, but most of the time there are steps an aspiring Purple Martin Landlord must take in order to attract martins to your colony. Playing recorded Martin calls during certain times of day has proven to be the most effective tool to attract birds to a colony. One can also set up decoys on your rack/housing to trick birds in the area to a martin colony’s presence.

Be Part of the Solution

Purple Martins have faced about a 40% decline as a species in the last 50 years. Many nesting colonies have collapsed in that time because people have steadily stopped putting up housing and provided nesting habitat for Martins to bring in future generations. Let’s start bringing Purple Martins back to South Carolina in larger numbers and put up as many gourd-racks as possible. The most effective ones that can conserve Purple Martins are ordinary people like you.